Construct the most elaborate buildings and monuments to become the city’s most prominent architect!

You are a prominent architect, your creations have been marveled over throughout your career, but now you have been called upon to take part in a challenge… The most eminent architects have gathered to construct a magnificent city with the most elaborate buildings and monuments Imaginable. Each of you strives to make the most significant contribution to the city, but your ambitions will inevitably lead to fierce competition. 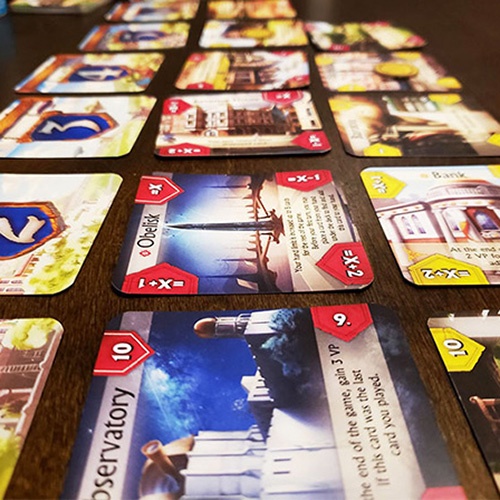 In Architectura, players will take turns placing cards into the city grid of blocks and streets. Each card has its own value, and may change during the course of the game as other cards are placed adjacent. There are four (4) steps to a player’s turn:

The first thing a player does during their turn is play a card. The player chooses a card from their hand and places it into one of three eligible spaces:

1. To start a new street – a card is placed into the first space of a street (row) that has no cards yet.

3. Over a destroyed card in a space with a face-down card. 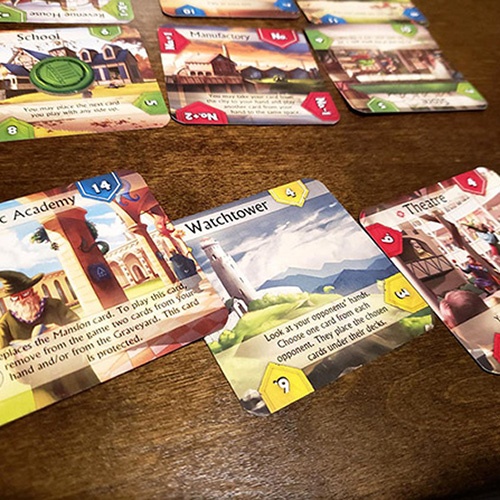 After playing a card, compare its value to the value of the card to the immediate left.

• If the value of the card to the left is at least two times lower, that card is destroyed (flip it face-down)!

• If the value of the card to the left is lower (but not two times lower), that card’s value decreases. Rotate the card 90 degrees counterclockwise, so it has a lower value showing at the top (unless it already has the lowest value showing).

• If the value of the card to the left is higher, its value increases. Rotate the card 90 degrees clockwise, so it has a higher value showing at the top (unless it already has the highest value). 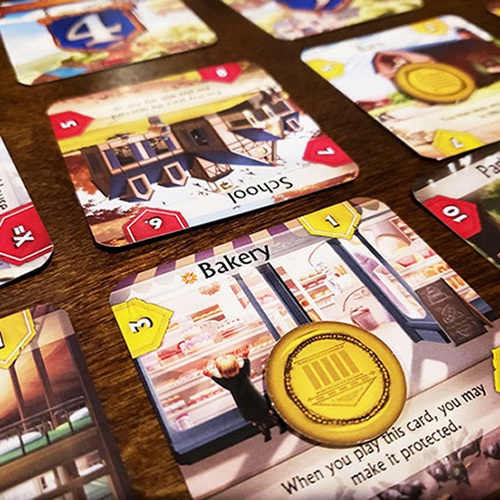 After comparing the cards’ values, resolve the effect of the card you have just played. The effect is the text listed on the bottom of the card, and usually is performed immediately.

Card effects can rotate cards 90 degrees in the direction of your choice, move cards, or even destroy them!

After resolving the card effect, draw a card to signify the end of your turn.

The game ends when there are no eligible spaces for a card to be played, and players then calculate their final scores by adding the top values showing on all of their buildings in the city. The player with the highest total wins!