Long ago, Easter Island was once a vast continent ravaged by constant volcanic activity. The settlers of this land raised Moai –gigantic monolithic statues to appease the gods and mend the wounds of the land. Unfortunately, instead of healing the land, the very act of sealing off craters and geysers caused an even greater disaster to unfold… 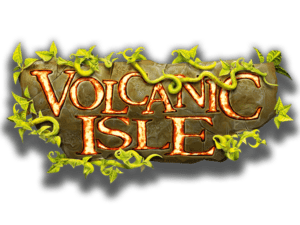 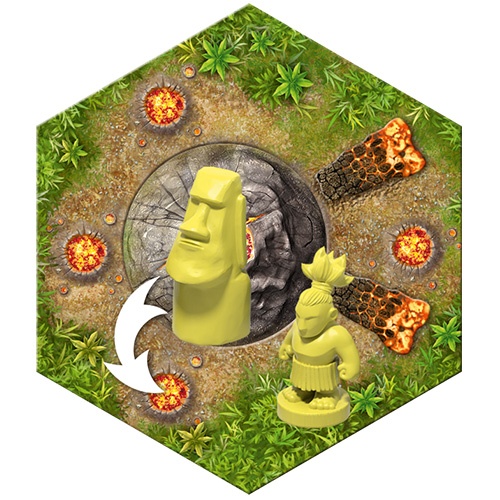 Each player in Volcanic Isle selects a color and takes all the Moai, Villages, Settlers, and the score marker of their color, then begins inhabiting the unstable continent of Mu.

On their turn, a player has 4 Action Points (AP) that can be spent:

Game play is simple, but resources on the island are limited! Lava tiles can be used to construct new Villages and sculpt Moai. Players may choose to build and expand their holdings near the Volcanoes (a risky but also rewarding choice)
or far from them, hoping to preserve their Villages and their people.

The Moai are paramount to your strategy and can influence the other players as well: They are used to obtain Victory Points, but also to trigger and hasten the irreversible process of the continent’s destruction—and thus to reach the game’s end. 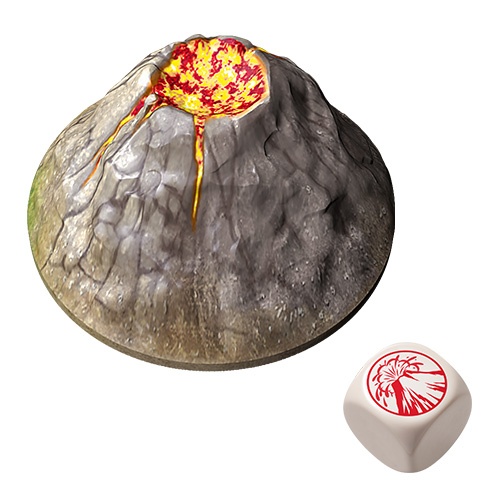 • Place a Fissure tile in front of the Moai, on the border
between its Area tile and the adjacent tile

If the volcano die lands on an eruption symbol, the active player draws a random Volcano token to determine which Volcano erupts, then places one Lava tile on each Channel space surrounding the Volcano in every direction. Unraised Moai and Villages occupying the spaces are destroyed! 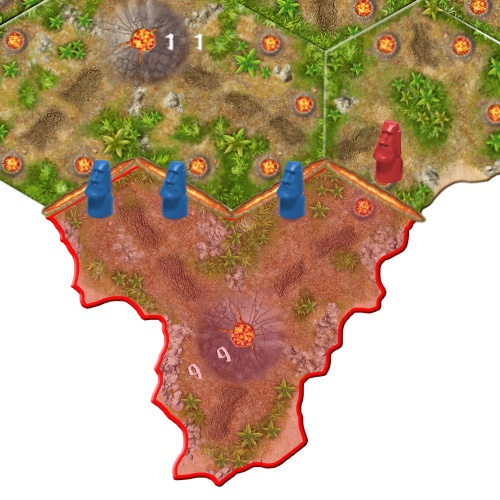 Raising Moai can do much more than cause a mere volcano to erupt, they can cause whole sections of the board to break away and sink into the sea!

If any section of the island is completely surrounded by Fissure tiles (placed when you raise Moai), that tile is doomed to sink into the darkness beneath the waves –destroying all Moai (thankfully, most settlers know how to swim and will be saved).

The game ends when there are two or fewer Volcanoes left on the board after part of the island sinks, and the player with the most victory points at the end wins!